A pest fish dubbed the “possum of the waterways” has been almost eradicated from Travis Wetland. 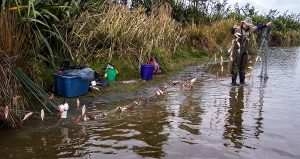 Rudd are native to Europe, Russia and central Asia, and were illegally introduced into New Zealand in 1967. The pest fish, which compete with native fish species and damage habitat, have spread around lakes, ponds and rivers throughout the North Island as well as Canterbury and Nelson.

Council and Department of Conservation staff immediately targeted the fish in April that year, with help from Travis Wetland Trust volunteers.

On the first night of fishing 400 rudd were caught. High numbers were also caught in 2009 and 2010 using fine mesh nets, known as gill nets.

However, after four consecutive seasons of zero catches, Council staff now believe that close to a decade of hard work to remove the fish from Travis Wetland’s central pond has paid off.

Read the rest of this article on the CCC website Here

To read the recent paper by Helen McCaughan of Wildlands prepared for the CCC, download the pdf from the Travis website Here (1.9 MB)

Following on from the very successful day in April, we were once again in the Matai/Totara area on 20th May.

We continued with weeding and the removal of combi-guards from 2 year old plantings. We were pleased with the growth of these plants, but recent wet weather meant that we saw fewer invertebrates compared with April. Combi-guards had been washed clean of most pupae and egg cases. Fortunately our hardy group of 13 volunteers did not include young children this time – they would have required snorkels to cope with the deep puddles that replaced the usual mud !

We also planted about 20 new trees in gaps and we look forward to seeing these totata, broadleaf and matai growing tall.

Thanks to those who attended on this cold and windy morning.

There will be celebration of Matariki at the Mahinga Kai Exemplar site including the opening of the Poppies commemoration garden.
Other activities will include,
Fun kids activities, planting, weaving, carving, school art and writing winners, displays and talks, food, coffee and more.
Click on the banner above for more info.

On May 20 while photographing Pukeko at Travis in the pond behind the information center Mike Ashbee had a close encounter with a Marsh Crake. 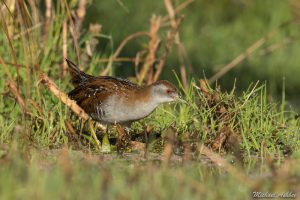 The end result was by far the best image of a Marsh Crake taken at Travis.

The bird stayed around for about 15 minutes, moving in and out of cover.

Thanks Mike for the use of the image.