There will be a morning tea afterwards for those that want to stay for a chat.

The day presented as overcast and slightly cool, so perfect conditions for a weeding workout.
A keen group of 14 set out for the Mairehau dunes to check the area planted by Waitākiri School on Arbor Day 2016.
As expected we were greeted by lush growth of weeds including grasses, hemlock, nightshade , Californian thistle and others.
Fortunately most native plants were growing well too and our weeding revealed tiny hebes sprouting from seed near parent plants.
Previous efforts to put thick mulch around the plants made it easier to uproot tough woody weeds and we soon had the area looking much tidier.
It was pleasing to release smaller plants, such as the spikey leafless lawyer, which had become completely buried by weed growth.
Several people encountered katydids and praying mantis during their work and an obliging kingfisher posed for photos during the walk back to base. Our morning ended with hearty snacks and warm drinks plus the chance to view some excellent Travis wildlife photos that John our ranger has recently had laminated for field use.
Thanks to all who helped out. 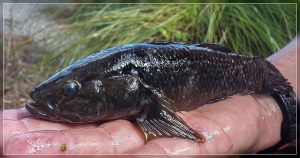 On Wednesday 7th and and Thursday 8th we did the annual pest fish monitoring. No rudd were caught , 5 years of zero catch, there is always some trepidation in my mind that we will catch 400 again. 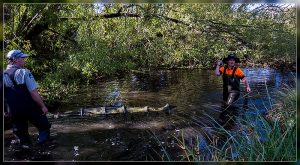 This year we followed Helen’s plan to monitor Travis steam and Angela stream.  This will be done over a 3 year period by doing a third of these streams each year in conjunction with the main pond.  We have 6 fyke nets (similar to a hinaki) which we spaced along the first third of Angela stm along with 2 gee-minnows at each site. The idea is to monitor for pest fish and native fish. 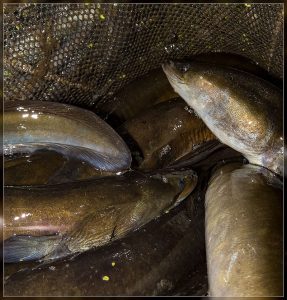 No Rudd were found, but 349 shortfinned eels were caught length from 80mm to 870mm, also caught 4 giant bullies, 2 common bullies and 1 inanga.  Unfortunately about 12 eels died in one of the fyke  nets.
Thanks to Grahame , Blair, Kenny and Helen McCaughan  for a successful and fun day.
On the Tuesday afternoon we saw a flock of at least 5 bellbirds in the willow trees by the bridge and heard several others nearby, also that evening there were several hundred welcome swallows wheeling above the pond.

It’s exciting to see the matai, totara, kahikatea and pokaka all fruiting this year, and seedlings of totara being found.
There are another 2 female kahikatea fruiting in the grove opposite the original one making a total of four.
Last week I noticed the matai fruit had gone so hopefully eaten by birds? 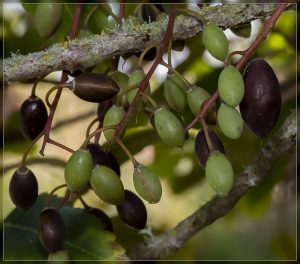 The boardwalk/bridge linking Mairehau Rd and Anne Flanagan Dell with the park is complete.
A sign will be in place soon with the no dog /no bike requirements.
The bridge is getting positive comments from Burwood Hospital staff.

Over the days of 21 and 22 March we carried out a monitoring program for mudfish.

The area surveyed was from south of the Manuka and on past the observation platform. 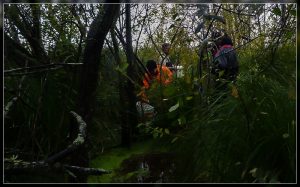 Both sides of the boardwalk were surveyed.

The monitoring was based on the DOC mudfish monitoring protocol and consisted of 10 lines of 8 gee-minnows.
The gee-minnows were left out overnight and picked up in the morning.

A sense of humor was definitely required as we all found ourselves submerged in deep holes at various times.

No mudfish were caught and only a handful of small eels.

Thanks to Helen McCaughan of Wildlands for organising us.