There will be a morning tea afterwards for those that want to stay for a chat. 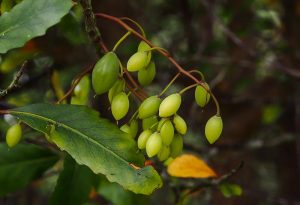 To add to that we now have seedlings appearing under the Totara on the bird hide track.

Also on the bird hide track is a Pokaka with a healthy crop of berries, a first for Travis.

This tree was planted in 2000 as part of the millennium plantings. 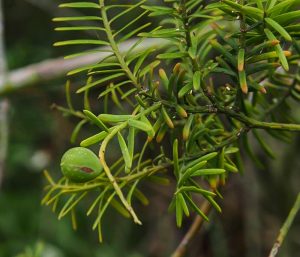 Another notable first is a Matai on the bird hide track that also has fruit on it, another Travis first.

The fourth of the Travis giants, Kahikatea has been fruiting and producing self sown seedlings for the last 3 years.

Some facts about these noble trees. 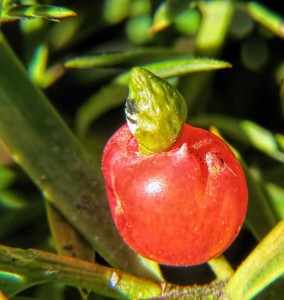 Pouakani is the biggest Totara in  NZ, it’s over 35 meters high and has a trunk diameter of 4 meteres.

Pouakani is around 1800 years old.

Mareikura before she was felled by a storm in 2014 was NZ’s largest Matai, around 2000 years old and 43 meters tall. She lived NE of Nelson.

Unfortunately the swampy lowland that this tree once dominated was also prized as farmland by the early settlers leading to wholesale destruction of the tree and its ecosystem.

Kahikatea pollen and leaves have been found in Jurassic rocks dated to 160 – 180 million years ago.

Deans Bush has a remnant population of trees with the oldest thought to be 550 years old. 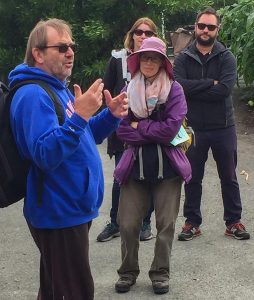 World Wetlands Day is celebrated every year on 2 February. This day marks the date of the adoption of the Convention on Wetlands on 2 February 1971, in the Iranian city of Ramsar on the shores of the Caspian Sea.

This year the theme was “Wetlands for a Sustainable Urban Future”. This theme is very relevant to Christchurch and especially to Travis Wetland it being an urban wetland.

The day was a little cool after the very hot weather the city had been experiencing. However, 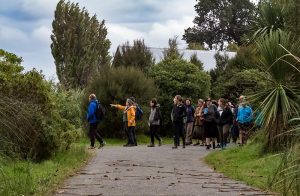 we had a great turn out with 30 people doing the walk lead by Dr Colin Meurk the Trust’s President. Other Trust members such as Grahame chipped in with his knowledge on the birds and insects of the wetland. Eleanor keep the children interested and excited by finding the smaller inhabitants of the swamp. The walk was followed by morning tea where everyone had a chance to chat and ask questions. We also had the honour of having one of Anne Flanagan’s sons in attendance.

It was fantastic to see the interest in the wetland and I am sure everyone had an enjoyable and informative morning.

What a scorcher this day was ! It was impressive to see 15 hardy souls turn up to toil away under the beating sun.
We decided to work in the area to the north of the Beach Road driveway and weed bashing was our goal. This area has many established trees and shrubs and recent rains had encouraged weeds to grow over some of them.
Convolvulus was leading the charge and it was satisfying to pull this off a sizeable shrub and reveal a smaller, infill plant which had been totally covered.It was also good to remove some large weeds like mallow and hemlock and, as usual, grass was growing to amazing heights around young plants.
Some parts of the area were surprisingly soggy and occasional squeals were heard as a stray foot disappeared into a muddy hollow.
Luckily this was not the only way to keep cool as a chilli bin full of cool drinks was on hand at the site.
We knocked off for an early lunch due to the heat but not before watering our totara planted nearby in December.
Thanks to all who helped out.

Travis Wetland – a Jewel in the Crown

Travis Wetland Nature Heritage Park is one of the vital ingredients of The Christchurch 360 Trail – now being touted as the first peri-urban ‘great walk’ in Aotearoa – New Zealand – http://christchurch360trail.org.nz/ . This is a 140km walking and cycling trail that circumnavigates the urbanised city of Christchurch.

Sound boring? Well actually every segment of the 8-12 day walk brings to light some new facet of Canterbury’s rich natural history – too long hidden under a cloak of oak. There are of course the awe-inspiring bush remnants and views of harbour , plains and mountains from the Crater Rim walkway, the beaches of Taylors, Sumner & Brighton, Estuaries, Spring-fed rivers, Braided Rivers, savannah grasslands, ancient forest, urban gardens and of course the intimate reflections of reeds, raupo and waterfowl at Travis. 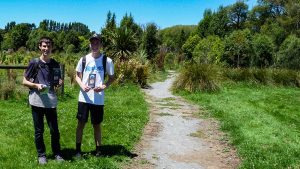 A few weeks ago, we saw these two lads from Middleton Grange High School who, with other class-mates, were on the last leg of the circuit – from Spencer Park to Bexley via Travis. We thought they showed great initiative and curiosity about what their city has to offer. Good on them. Hopefully they are able to answer this question better now.

Did you know that Christchurch has a similar number of native plants growing wild as have our National Parks, and that we have the greatest bird diversity for any comparable district in the country because of the wide range of habitats? Well we do, and places like Travis as a feature of the 360Trail help our citizens and visitors experience this nature. Marketing it internationally will help to raise the profile of our City as a place to be, rich in our special biodiversity as well as in culture and innovation. These are the enduring features that will raise our city up out of the post-earthquake doldrums.

Farewell To The Godwits

The annual Farewell to the Godwits event is scheduled for 6pm on Friday 2 March on a big high tide.

Meet at “The Spit” the end of Rockinghorse Rd, Southshore.

Its no longer a “summertimes event” and the Council Events team are no longer involved, but the park rangers still are along with folks from the ornithological society.

There’s always a collection of scopes to view the birds and several knowledgeable folks on hand to answer questions and id the birds.