There will be a bar-b-que afterwards for those that want to stay for a chat.

A lovely mild morning saw us visiting the matai-totara area for the first time in many months. Thirty-five keen people braved this part of the wetland which has had very high water levels this year, making access difficult.
Our mission was to release plants from our 2016 planting session and to remove combi-guards and canes.

The plants,mainly manuka and flax, had achieved impressive growth rates in 2 years. 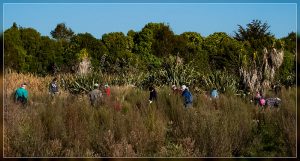 We checked inside combi-guards for invertebrate life and found a few spiders and 3 species of slugs.

The children present were very helpful with this activity and also showed boundless energy collecting up used combi-guards and returning them to the truck.

Being such a large group we made fast progress, so John our ranger took us on a walk around the more established parts of the area where the trees are ten to twelve years old and look very lush . John pointed out spaces where trees have not survived and explained that we hope to re-plant these spaces at our May workday.

The walk back to base allowed ample opportunity to observe birdlife and as ever our morning ended with excellent refreshments.

We have just finished our predator trapping for the season. We followed the recommendations in the Wildlands report by:
a) Decreasing the distance between traps and rat bait station from 100 metres to 50 metres around the perimeter and added more bait stations at 50 metres intervals to our internal trap lines to be more effective with the home range of rats
b) Two poison controls one in November one in March using Cholecalciferol (vitamin D) poison as recommended in the Wildlands review, with the poison pulsed for 7 days or until the bait stops being taken. This is to avoid sub-lethal doses and bait shyness. Over the next 5 years we hope to show if there see if there is a response in the number of rats caught and tracked.

Blair Balsom (our fixed term student) went back over the trap captures for the previous 5 years and produced a graph based representation of numbers and trends and identifying the hot trap which makes it very useful for Kenny and I to see what’s happening with each predator and monitor ‘hot spots’ for follow up or future control.
Results for 2017-18 are Rats 124, Hedgehog, 14 Weasels 1. 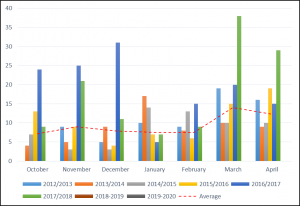 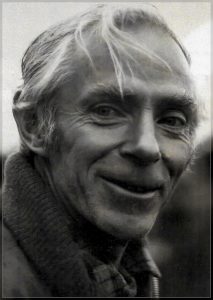 He was an avid, early supporter of Travis Wetland and pulled many seedling willows from there during the mid-90’s.

Over the years Bill and Peggy often joined the walks that have been held at the Wetland, and on the predecessor of the Christchurch 360 Trail that passes through Travis on its 140km circuit of the City. Bill identified plants along the way. He had a friendly very gentle manner; never tired of answering questions; he always knew the answers.

No wonder; his interest in botany began at Primary School in England.

He became a diploma student at the Royal Horticultural Society and worked at the famous Wisley Gardens, England for three years.

Along with three other botanists Bill went on an expedition to Nepal in 1952. They collected 5000 plants specimens over 8 months for the Royal Horticultural Society & the British Museum. Two years later in Nepal [1954] Bill and one other botanist added a further 9,500 specimens to the collection.

Botany Bill as he later became known immigrated to New Zealand from England in 1961 after being invited to work at Botany Division, DSIR, Lincoln.

Many of the early plant collections at the Allan Herbarium Lincoln were made by Bill, especially introduced species and those from Pacifica. On family holidays he continued to collect plants. Even after he retired he continued to work at the Herbarium nearly every day until 2015; identifying plants. Around 20,000 plants there were collected by Bill including 5000 from the Cook Islands.

He co-authored several botanical books; published a book on the Flora of Niue in 1970 and made 9 collecting trips to the Cook Islands between 1974 and 2002. After he ‘retired’, work began in earnest on his comprehensive Flora of the Cook Islands. It was launched at Manaaki Whenua – Landcare Research, Lincoln in 2016 with key visitors from the Cook Islands community attending and speaking; Bill was able to be present. He was unable to attend its second launch in Rarotonga 2017.

Bill participated in community life too and along with Peggy set up the Packe St Community Garden, an ‘adopt a park’ city council initiative. He worked a day a week at Orton Bradley Park, wrote thoughtful letters to the Press and participated in street protests.

He received a New Zealand Order of Merit in 2005 for his services to botany.

He was a member of the Royal Society of New Zealand, the Royal Institute of Horticulture, the New Zealand Botanical Society and the Institute of Noxious Plants Officers. He helped found the Friends of the Botanic Gardens Christchurch and was made a life member in 2017.

It was very exciting to be told that he had been made a Foreign Member of the Linnaean Society of London 2017. What an honour as only 50 members hold this award at any one time.

If you come across a plant species with a botanical name sykesii — yes it is named after the gentle dedicated Botany Bill. A privilege to have known him.

Twas down through the gorge the wind doth blow,
Reaching the high country tussock
Before reaching the foot hills below,
Over the downs and on to the plains
Increasing its momentum after leaving its rains
To rush across plains and riverbed dry,
Before reaching the old Port Hills with a rendering sigh
And there sowed the seed of a city which grew to be fanned on by its hot breath each season anew.

So to the West the arch is high, 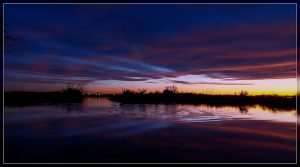 And the grass on the hills is brown and dry
Remember the old Nor Wester is about to blow
It’s hot breath melting the High Country snow,
Awaking the Rakaia and Waimak wide,
To bring their waters from mountain to tide.