Notes from the AGM

As many of you know almost a year ago the Trust lost a long standing and valued member Charlie Catt. I’d like to take just a moment to acknowledge again Charlie’s role, his value to us all and the fact that he is missed every time there is an event or a gathering or an activity at Travis.

The red zone and its future continues to loom large for Travis. This has been a recurring theme in end of year statements since the red-zoning took place, it feels like forever now. This time around Regenerate Christchurch has aired concepts for the future use of the redzone for comment. They are seeking feedback on the range of uses proposed and whether they have missed anyting that could be a valued or valuable use of the land. Please take the time to submit at the Regen website https://engage.regeneratechristchurch.nz/ engagement hub.

Planting has again been a feature of the years’ work at Travis – the areas at the Mairehau road dune site and now the back dune area adjacent to the Beach Road car park are really starting to establish. This is in no small part due to efforts at public plantings and trust workdays in terms of planting and establishment maintenance, of course also heavily supplemented by the Rangers and contractors. Key has also been the establishment of reliable water sources to get these planting really bedded in. Thanks to Kenny and John for that work.

As you have all seen this year has been wetter than normal in Christchurch. This has both positive and negative results in a wetland for planting establishments. It makes it easier in dryer locations, but more difficult in those seasonally marginal areas that get wet and stay wet longer than is ideal. As I noted in the comments on planting – the establishment of recent plantings has been great, there will no doubt however be areas where the additional water has had some impact that is less positive. This brings into focus a changing climate and long term issues for the Travis project with sea level rise and consequent drainage reduction.

After much discussion and threatening to start a process we have begun debating and discussing a new 10 year plan. This is in conjunction with the Rangers obviously, and will ultimately have to be consulted on with the public before becoming part of any formal park management plan for the wetland. It is however a good chance to re-visit the original plans for the park in light of changes and development over time. While this function is really one of Council’s it is not high on a priority list and unlikely to be undertaken soon. If the Trust and Council staff work together on progress it can only be of benefit. It will also guide action going forward as the existing plans have become outdated and to a degree superseded by developments on the ground. 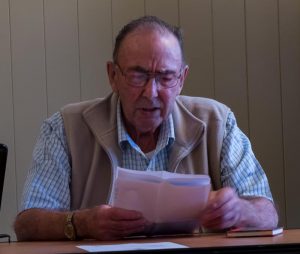 As always the Trust needs volunteers both at physical events like plantings and workdays, and also to stand for and sit on the board. At present we have a minimum compliment of 10 board members, there are potential vacancies for up to five more should anyone be interested in stepping forward. We would be happy to have additional members and the input and perspective they bring. 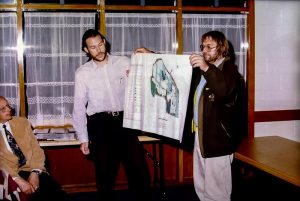 Thank you all for volunteering your time at workdays, meetings and during the week. The passion and commitment of the Trust and everyone involved with Travis is very inspiring we enjoy the conversations and sharing of ideas and learning. Thanks to Craig Taylor and the IDEAS (IHC) Conservation Work Team and to the Wai-ora Trust conservation work teams for maintaining our amenity and planted areas.

Thanks to Eleanor, Shona, Al and Wayne for their ensuring the survival of both the rare and the new plants with watering and weeding. 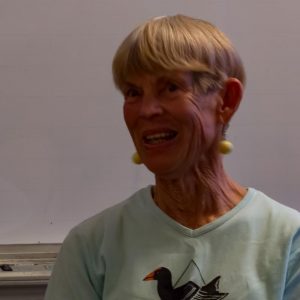 Following last years breeding by Australasian Bittern it was hoped the bittern would be able to be monitored this year as part of a Canterbury wide study. A male bittern has been heard booming but inconclusive as to whether it is still present.

A Marsh Crake appeared in front of 40 people on a Sanctuary NZ field trip in August.

Due to wet ground we went to plan B which meant using suitable plants from our existing order to plant adjacent to the Beach Rd car park, a very successful day, good energy and music. 140 people helped at the September planting day, about 1200 plants were planted. A diverse group of people supported by Trees for Canterbury, thanks to Steve and Robin.

Keystone ecology have just planted 4000 plants at totara – matai forest, now very close to 6ha, since 2006 more than 14,000 plants have been planted and thanks to IDEA / IHC more than 5,000 combi-guard sleeves have been reused this year.

No rudd were caught this 2016/17 therefore only one control is planned for February 2018.

Wildlands reports of 2016 Management of Rudd in Travis and 2017 Fish Monitoring of other waterways within the park. This was done at selected sites in March 2017, due to biosecurity concerns with aquatic weeds especially Beggars Ticks we were not able to use nets from other agencies. We now have 6 fyke nets of our own and will monitor the waterways of the wetland on a 3 yearly rotation.

The critical endangered status of Marsh Crake, Spotless Crake and Australasian Bittern and their presence in an urban wetland is the main reason for improving our predator control. Wildlands was commissioned to review our 15 years of predator control, analyse the data and make recommendations for improvements. Rat numbers have gone up over time.

Income for the year was very similar to the previous year. Membership income was up a bit and near to where it was the year before. Interest income was down a little due to the decline in term deposit interest rates over recent years. During the year the Trust moved its accounts to Kiwibank, which was offering slightly better deposit rates at the time our term deposit last matured, and also to shift our patronage to a NZ owned bank.

In June the Trust purchased $2000 of plants from Trees for Canterbury, selecting some of the less common species that we would like to see represented here. We plan to spend at least this amount each year on plants for the wetland, as long as the income supports it. The other $256 spent on plants was also with TFC and was specifically for the lizard habitat area outside the Education Center.

We are very lucky to have the website ably maintained and developed by Grahame Bell, so all the Trust is paying for is the hosting fee. We are also very fortunate that Christchurch Community Accounting audits our accounts for an extremely reasonable fee.

Income for the year exceeded expenses by $800, so in the current 2017/18 year we could spend more on plants or other initiatives.

Changes To The Constitution

Two changes were proposed and passed.

That the words “or November” be add to clause 15a, to allow the AGM to be held in either October or November.

That the words “and published in a Christchurch newspaper” be removed from clause 17b. 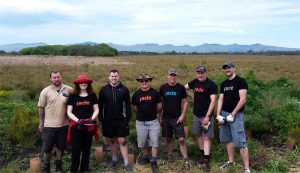 For the 3rd year in a row staff members from Jade Software came and spent a day at Travis.

This year 6 keen folks helped tidy up the Waitakiri school plantings on the Mairehau Rd dunes.